A Life Changing Chance Encounter at a Hackathon: Stories from Casana with Tom Caputi 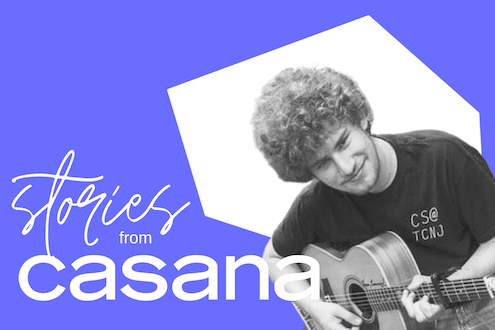 Tom Caputi is one of Casana’s first employees. Tom grew up in the small town of New Hope in Pennsylvania, graduated from The College of New Jersey with a degree in software engineering, kicked off his career at Datto thanks to a chance meeting with Austin McChord at a hackathon, and now leads the firmware team at Casana.

It was a path changing course that steered Tom to focus on software engineering. The Introduction to Engineering course covered mechanical, biomedical, and civil engineering. Students were assigned a semester-long project in each of the engineering concentrations. The lesson for Tom was that the physical world can be very fiddly and there are many factors outside of one’s control that will influence the end result.

For civil engineering, we had to build a bridge out of coffee stirrers. Our design was good, I thought, but we had to use our own glue. We used the strongest glue we had heard of at the time, which is Gorilla Glue - more of an epoxy than a glue. It was terrible at holding wood together because it flexed way too much. When it came time to test it we did not even hold the minimum required weight, so we had to build it again.

For biomedical engineering, we had to conduct a ‘deep vein thrombectomy simulation’ with a straw, some string, and a small piece of tape. We were tasked with removing cheese whiz from tube pasta. Our solution worked, but was far from the best.

For mechanical engineering, we had to modify a solar powered car kit so that it would move slowly (6 feet in 5 minutes) using gear ratios. We used hand drills which were not accurate and the axles did not fit well enough for the wheel to move.

I quickly realized that the best thing about computers is that you don’t have to deal with as many outside factors. It is much simpler. If you write the code correctly it will work the same way, every time.

Tom switched to focus his degree on software engineering and subsequently participated in over 40 hackathons over the next two years. One hackathon in particular launched Tom into the next chapter of his career.

Hackathons are typically sponsored, and this time Datto, a data backup and security company led by Austin McChord, invested in the event. During the all-day event, there were side competitions, one of which Austin would listen to business pitches and award the first place a cash prize of $5000.

Tom pitched an idea but ran into technical difficulties during the presentation. Austin was not interested in investing in his idea, but had an even better proposition for Tom.

Austin pulled me aside and offered me a position at Datto. I knew I had to accept.

This was the start of Tom’s career as a software engineer with Datto for the following six years. The pandemic inspired Tom, like many others, to pick his head up and think about what else is out there.

I had been at Datto for 6 years, during which Datto was acquired and went public. Austin had since left to start new ventures. One day I received a text from Austin. He was reaching out about a new venture he had joined and became the CEO called Heart Health Intelligence, the company we now know as Casana.

Tom knew that wherever Austin led, the company, the environment, and the employees would thrive. Along with Tom’s initial interest in Casana, the opportunity to work on a low level C project is what sparked his interest further. Integrating hardware in his core work was a new challenge. Tom became one of the first employees at Casana and after two years became the official team lead for Casana’s firmware team.

The mission and the idea of working on something that can help people was very appealing to me. I am most excited about the novel algorithms work going on and making real improvements on how health is monitored at the home using these algorithms.

As I learned in my Intro to Engineering course, success is having a product that is stable, that provides accurate and reliable measurements, every time - or as close to every time as possible. With a medical device, that is even more important. Having a system that works consistently and reliably for years on end without intervention is what I see as success.

Every time Nick [Nicholas Conn, Casana CSO] goes on the radio, there is an overflow of positive feedback and support. People are excited to see Casana and The Heart Seat develop and get to the market. I can’t wait to see The Heart Seat on the market and in people’s homes.

Interested in joining the team? Check out our open positions here. Learn more about the Heart Seat and sign up for our newsletter and updates!