Participate in our Research

Austin McChord, CEO of Casana, On Stepping Outside Your Comfort Zone 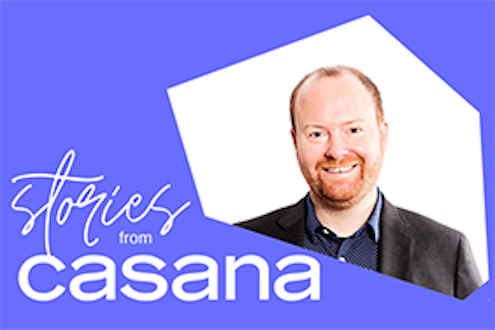 Austin McChord: “I hope that whatever project we’re working on, the people I’m working with are all at the apex of their careers; they have never taken on a challenge this big, doing this thing before.”

Austin McChord is the founder and former CEO of Datto, an innovative provider of comprehensive backup, recovery, and business continuity solutions, Austin led the company through its acquisition by Vista Equity Partners in 2017, and subsequent $4B+ IPO in 2020. Austin is a Forbes 30 Under 30, was named Ernst & Young Technology Entrepreneur of the Year in 2016, and earned recognition as one of the nation's top 50 philanthropists in 2017. He holds several patents and has been a featured keynote speaker at national technology conferences.

Tell us a little bit about what your career path has been and how it’s changed over time.

At age 6, I knew I was going to be the CEO of a toilet seat company, it was a certain destiny right there [sarcasm]. When I was younger, I wanted to be an inventor and it turns out that’s not actually a job that you can apply for. If you go to LinkedIn and search “inventor,” they don't have openings at Jumbo Co.: “Now hiring entry-level inventors.” The closest thing in modern parlance to an inventor is an entrepreneur.

I started out in college with this idea, and in the same way that Nick has a passion for his work with The Heart SeatTM, I was like, “I'm going to put all my energy behind this idea, and either it will take off and go to the moon, or we will crash and it will be an enormous disaster.” I was very lucky that the idea took off and that Datto, the company I founded right out of college, became very successful. I grew the company to thousands of employees and at a certain point, I decided, “I don't want this to be the only thing I’ve ever done,” so I stepped down as CEO and shifted my role to a Board member. Trying to figure out what to do next from there was challenging. I thought to myself, “Okay, I’d love to have this idea, bring it to scale, do that whole inventor thing. Okay, I did that—now what?”. For me, the big thing following Datto was, how do I help other people do what I did? Helping Nick achieve his vision here at Casana is really exciting. During my time at General Catalyst, when I was doing the venture capital thing for awhile, I got to work with a bunch of really cool people and I would tell them, “If you get in the trenches and see how a company operates and runs from the inside, you can build something so much more exciting compared with living the groundhog day of investing, where it’s just new deals, new deals, new deals.” And so to work with people from that team again and to build Casana together is something new, cool, different, and super exciting.

What about Casana — the mission, the technology, the product — was the biggest draw for you in deciding to join as CEO?

Casana, and specifically our first product, The Heart SeatTM, fits into a category of products where the less you think about it, the better it is. There aren’t a lot of products that fit that category but I love that category. It's a great place to sell into, and it's a category where you’re not fighting for somebody's attention. Getting people’s attention is really, really hard because you fight with everything else that they do in a day, and so, the fact that we will give people time back instead of making another demand on their time is great. The U.S. has a growing elderly population that will only continue to grow in the coming decades, so building technology to benefit that population is definitely something that's really interesting. Additionally, for me, the opportunity to work with Jeff Leiden, who is on Casana’s board, and to have him help see all of this through was such a unique opportunity, and was like, “Yeah, let’s do it, let’s go for it.”

This adventure, the whole medical device space is new to me. A regulated space is very different—-adapting to that has been a welcome challenge, and you can see where other companies definitely will have crumbled or failed or really backed away from ambitious visions because they're afraid of the regulatory effort required to get there. It's a trade-off, and a big part of my job at Casana is to push us to deliver the best possible product. If that means that it's a more challenging regulatory hurdle to get over, so be it, but that's the direction that we're going to go in.

Describe your relationship with Casana founder Nick Conn and how being the CEO, but not founder, this time around is different.

The thing that I saw with Nick is that his life's work has been, and is, this project, and he has an indefinite passion for it; he could spend an infinite number of hours thinking about this, working on building better systems, better tools. Where I am in my career, the opportunity to assist him in building out the other half of the business, and to help his life’s work become a reality, is really interesting to me. It’s definitely new and different in that it's not my own idea, it’s Nick’s, and that's been a little bit of an adjustment but definitely really cool to see that happen and push to make that happen. It’s also been exciting to help Nick by surrounding him with really great, talented people, and to bring more people onto the team. I think that my role is going to change as we start to go to market; that’s about getting out there, pounding the pavement, getting these things in people’s hands, pushing to grow faster, faster, faster, and really helping turn that crank to bring this entirely new product to market. Beyond that, the opportunity to learn this space is really exciting and a big reason why I decided to join forces with Nick to build Casana.

The way I see it is that my job is to build all the parts of the business that Nick doesn’t have experience with, to give Nick the runway to take his genius and go deep on it. We both agree that the way this product will be most impactful is if we sell a zillion of them. So, Nick’s job is to make sure the product works and meets the clinical standards necessary, and my job is to make sure that we can cause the product to exist, so that manufacturing something is non-trivial, and then build and take this great product to market.

What do you feel makes you an interesting leader worth following and what advice would you give to your younger self, or young entrepreneurs who are just getting started?

There's a lot packed into that question... I think, and I hope, that a lot of the reason that people want to work with me is that I push and challenge people to take on new things and I’m always looking for people to step past whatever it is they’ve done before and do one step more, do that next biggest thing. When I think about the people that I work with, I hope that whatever project we’re working on, they're all at the apex of their careers; they have never taken on a challenge this big, doing this thing before. To trust people to take on something entirely new is what’s exciting because it's when you know that you're going to get somebody's best work, and I think that people look to be challenged and look for that opportunity to do something new and step outside their comfort zone.

As for advice, when push comes to shove, trusting your gut is more valuable than a lot of stuff. I think those points when I wavered, it really was a mistake. It's funny because it’s hard to tell— your mind is so selective in how it remembers things—so you can't even really trust yourself, but I can think of lots of moments in the past where I was like, “I don’t really like this direction but everybody else seems to, so we’ll go that way,” and then it was a disaster. There’s a tendency to think, “Maybe I should've applied more weight in that decision,” but I don't know how many times I remember the cases of “I don’t really like this direction” and it turned out really well. I'm sure there were cases of that but they don’t stick out in your mind as much, so it’s always scary. I think, by and large, trusting your gut is crucial—fear gets you very little so don't be afraid to run and jump.

Being an entrepreneur takes a little bit of that “crazy”; there are very few successful entrepreneurs out there that didn't bet an enormous amount of time, energy, effort, on what they're doing, but I think that it really just takes that risk appetite. The most successful people risk everything again and again and again, and they basically play all the way in at the poker table. But that is really bad advice to give anyone as to what to do because there are a whole lot of people that played all in and lost everything. We don't really write books about them, there aren’t news stories saying, “Local man bet life savings on company; company flopped and man has no home.” Yeah, those stories tend not to lead the news. There are all different kinds of successful entrepreneurs but risk appetite and trusting your gut are characteristics that I’d put at the top of my list.