Participate in our Research

Nick Conn: “I wanted to build something that could help people today, not 10 years from now.” 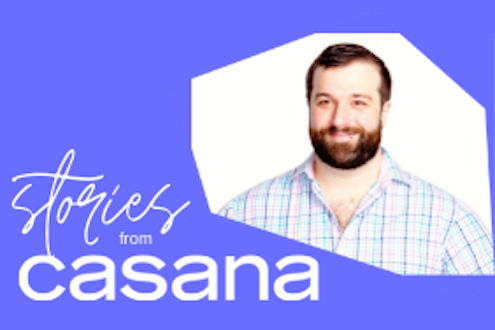 So much of our biological processes are still complete mysteries. It’s so inspiring as someone who loves to solve problems and is not afraid of a challenge.

Ninety percent of startups fail, whether that is due to financial strain, market downturn, inadequate research, poor partnerships, or simply ineffectual marketing. The overarching effect leadership has on a successful startup cannot be understated. Casana began under an entirely different name, Heart Health Intelligence, and our roots go even further back to a PhD project in a research lab at Rochester Institute of Technology. So what were the driving factors to going from a science project to a startup that raised a $14m+ Series A? We believe that it all comes down to people, and their invaluable dedication and contributions to the company.

Nicholas Conn is the founder and Chief Scientific Officer (CSO), formerly Chief Executive Officer (CEO), of Casana. Prior to founding Casana, Nick was a Research Scientist at the Rochester Institute of Technology (RIT). He completed his PhD in Microsystems Engineering in 2016 at RIT, where he developed Casana’s technology – a toilet seat-based cardiovascular monitoring system. We conducted an interview with Nick to help determine what it was that inspired his innovative approach to effortless, patient-centered technology.

What do you feel makes you an interesting leader worth following? Why do you believe people want to follow you and support you as the organization grows?

I think one of the hallmarks for a leader that people want to follow is somebody who is themselves, who doesn’t pretend to be somebody else, and who doesn’t shy away from who they are. I am a little quirky but I don't shy away from it, I embrace it. You know when you’re speaking with me that you get me. I’m not playing games, I’m not trying to manipulate anyone for selfish reasons and I just let my own personal attributes shine through.

Can you tell us a little bit about what your career path has been and how it’s changed? Did you plan on becoming a CEO or did it just happen?

I actually knew that I wanted to be an electrical engineer since I was eleven. It started as a hobby, I would build circuit boards—in highschool I built an mp3 player—and I just loved doing everything ‘technology’: robotics, programming, circuit boards, even reading science fiction, which is where I ended up falling in love with medical devices. I originally wanted to do neural prosthetics, and work on creating brain implants. It was something that always intrigued me from the science fiction I read and I became obsessed with the human body. I read tons of neuroscience books and was just constantly astounded by the complexity of the brain and how little we, as humans, know about it.

We can create many things, but much of our biological processes are still complete mysteries, and that’s exciting. Especially with the brain, that was one of the things that captivated me so much, and I chose to go to RIT because at the time it was one of the few programs in the country that had an electrical engineering degree with such a big focus on biomedical engineering. I ended up applying to two schools, got into RIT right away, did early acceptance, and came to Rochester. Ever since I was a child, I always knew I wanted to be an entrepreneur—I loved solving problems, weird problems, whatever problem of the day existed, I wanted to try to solve it.

As I went through RIT, I realized that neural prosthetic research was a long way off from widespread adoption—thankfully, I think, because my co-ops ended up pushing me towards cardiology. Where many neural prosthetics are still in really early stages of research, I wanted to work on something that has not only commercial viability, but something that can help people now, not ten years from now, or twenty years from now. Cardiology ended up being a great fit.

You know it’s interesting, my undergrad was focused on having fun. I really just focused on enjoying that time in my life; I studied abroad in Germany and I even started working abroad. I worked at an implantable medical device company in Berlin—after doing an intensive language program in another part of Germany—where I used my time there to expand my horizons, travel, meet people, and enjoy the college experience. Because I went in with quite a bit of hands-on knowledge of electrical engineering, I was able to take some personal time for myself, and I’m glad I did because starting a business takes every ounce of energy and effort that you have. So, it was almost as if I was building up and preparing my reserves, before the big push of a PhD and launching the company.

From that point on, I was laser focused on my sole objective of starting a medical device company. That’s always what I wanted to do. Even some of my friends at RIT, in my undergrad, jokingly called me, “Doctor Conn Doctor” because they thought I’d get two PhDs, which I tell you I will not! One was more than enough. As I continued on, I came up with the seat idea while working with David Borkholder, who was my PhD advisor, and it was the natural thing to start a business with because it had such wild potential; and it’s also super fun and exciting!

Have you had a mentor or a guide who coached you, or did you learn independently? Was there anyone in particular that really helped your career?

As far as mentors go, I had many many mentors. One of the things that I can’t tell people enough is, “go find trusted mentors and advisors”. You don’t have experience if you’re doing something new. You could be smart, you could have all the right instincts, but you don’t know everything, and sometimes you don’t have the life experiences that you need to handle tough situations. And boy, are there tough situations that arise. Difficult decisions need to be made and often it’s really important, more times than not, to get a trusted advisor’s advice. But above all, a trusted advisor can help you see your own shortcomings. Those are things that you tend to be blind to and if you have a good relationship with that advisor it can really help.

There were a few mentors that were really instrumental for me. One of which was Dave Borkholder, who was my PhD advisor. I actually remember distinctly—I don’t know if I’ve ever told Dave this—but when I was younger I would tend to talk over people constantly. It was a bad habit I had. Being young and excited, I just wanted to speak, talk, answer questions, and solve the problem, but later I realized that there’s always a time for you to speak later. During a meeting with some colleagues Dave stopped the meeting, looked at me and said, “stop talking over people”. We had a good rapport and he was being respectful, but that was something that stuck with me and it’s something that I feel like I’ve made monster progress on over time. Being aware of your shortcomings, your innate reactions, so that you can exercise restraint, that’s kind of hard to overcome at first.

Another advisor would be Rich Notargiacomo. Rich was the director of Venture Creations at RIT, and Rich was unbelievable. You’ve got to find advisors that give you the ungarnished truth, no matter how ugly it is, no matter how counter to your own viewpoint it is. One of the things that I always told Rich was that I appreciated him for his unwavering and very direct truth. It allows you to get your head around situations more clearly. Rich helped guide me through the incredibly challenging times when Heart Health Intelligence (now Casana) was just starting off.

Over the years, I’ve had many other mentors who helped guid my intellectual and academic curiosity, as well as my personal and professional growth. I truly believe that being surrounded by a strong set of advisors is absolutely critical, whether you are starting a company or not.

What are the one or two big pieces of advice that you would give to your younger self?

What I would say served me very well, and I would stress this to everybody, everybody I talk to, is to be fearless. Fear is the thing that paralyzes you, fear is the thing that prevents you from reaching your full potential. So many people are scared of failing, scared of what others will think, scared of applying to this job they’re not quite qualified for﹘apply to it! What’s the worst thing that could happen? They say no, which you’re already expecting because you believe you’re underqualified. But maybe they say yes. Maybe they see that you have the ability to excel beyond the experience you have on paper.

Never sell yourself short. These are really key things that I believe so many people just don’t focus on, and they should! The analogy I like to share is, if you want to jump onto a tall box, but you’re worried about falling and failing and you jump cautiously, will you ever get to the top? No. If you jump cautiously you’ll bang your knee and scrape your shin. You might get up there, but how much easier is it if you just give it your all, and jump like you can jump to the moon. Next thing you know you’re on top of that box with ease. I really truly think that if more people were fearless they’d be able to find that job that was their dream.

While this may be somewhat of a character flaw, I don’t have fears. Well, I’m scared of the dentist and I’m scared of some weird stuff, but as far as taking risks? I moved to Germany without a place to live and stayed in a hostel for two weeks while I looked for apartments. I had no fear. I applied to a job out of my undergrad that required a PhD degree and while I ended up getting a job offer, luckily I turned it down and here I am years later.

I will try anything. I will publicly speak anywhere and it’s something that has characterized my career. Even today I think this is something that serves me well as we seek to solve some very technically challenging problems. The Heart Seat™ is no exception.

“I have a vision for transitioning health care from reactive to proactive, being able to monitor and measure things we can capture in the home on a daily basis that were previously available only in a clinical setting. We may be able to predict and prevent many problems—not just related to cardiovascular disease. Who knows what we will find!” - Nicholas Conn