Participate in our research

Amy Blake: "When you can confidently support a device that you would personally, wholeheartedly, use to manage the health of your loved ones, it’s worth talking about" 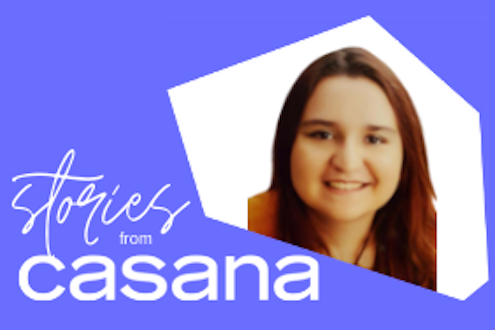 Both my parents smoked.

This is a rather conventional way to start a story but it’s true and it gets straight to the heart of the problem. Nowadays everyone knows how dangerous and addictive smoking can be, people have actually known long before this point, but breaking bad habits is easier said than done.

My mom managed to stop when I was still a child. She used to hide it, sneaking outside every night for her last smoke of the evening… which is probably what clued me into the fact smoking was far from harmless. What confirmed my fears was my father’s declining health.

Let’s skip forward ten years. I’ve graduated high school, entered the college of my dreams, I even found myself a cooperative education (co-op) position for the summer at a promising health start-up! My dad, however, has lost 89% of his lung function, suffers from COPD and other various health issues.

The doctors make it very clear what needs to be done to manage my father’s health, but as with all regimens, compliance is an issue. It’s hard to force someone to adhere to a daily medical routine when they can hardly breathe half the time. He’s supposed to monitor this health, so we got him a blood pressure cuff, a finger oximeter, and all the other little gadgets the doctors recommended- and everyone played with them for about a week.

They were good fun. Novelty interests that kept us entertained from moment to moment, but they were quickly forgotten and almost never used. It was during my co-op at Casana that I saw these devices again. I was studying them for a report on which were the most accurate on the market. To my surprise, the equipment my father has been using was some of the lowest on the spectrum. One customer even called the blood pressure cuff “dangerously inaccurate” which was alarming to say the least.

I hated it. The medical devices that we had been told to rely on were suddenly put under a new light. Not only did they require daily engagement from my father, but the results weren’t even worth recording. So, I did the only thing that made sense at the time, I signed up my household to test the medical device my company was making: The Heart Seat.

As funny as it sounds, Casana is in the business of toilet seats (and yes, we have heard all of the jokes) which monitor several key clinical measurements every time the user goes to the bathroom. For all my father’s struggles since his health has declined, the one thing he still always does every single day is visit the toilet.

I worked for this company all summer (and will stay on as a co-op for the academic school year), I’ve seen how dedicated the employees are, and I understand that I am undoubtedly biased, but when you can confidently support the creation of a device that you would personally, wholeheartedly, use to manage the health of your loved ones, it’s definitely something worth talking about.

It was over 2,000 years ago when the Roman poet Virgil stated, “The greatest wealth is health.” Since then, what we define as health has changed. So many of the solutions presented by doctors are reactive, they treat an issue that has already appeared and endangered a life. With the introduction of telehealth and telemonitoring patients can take their health into their own hands and transition from reactive to proactive healthcare.

My family’s story is probably a dime a dozen. Everyone knows someone who suffers from an ongoing chronic illness, fortunately I found a practical solution that I trust, one that I hope others will give a chance. If not for their own sake, then for their loved ones, because health is irreplaceable.